Home Recommended Insights NERVA: the nuclear engine for the explosion ... 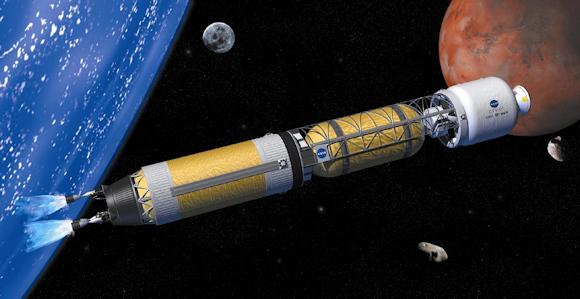 In the early 50s the space race of the two great planetary powers, the USA and the USSR, was still in its infancy. From a theoretical point of view, however, both nations had already devised several useful systems to bring man beyond the boundary of the atmosphere, thanks to the progress in orbital mechanics, missiles and the ability to work "special" materials.

One of the great scientific and engineering challenges was to conceive a propulsion system suitable for this mission, therefore able to produce a sufficient thrust to overcome the enormous weight force of spacecraft and allow them to reach a speed greater than escape speed terrestrial (just over 40.000 km / h). Furthermore, it was essential that the engine could then continue to operate outside the atmosphere, so that the vehicle could further accelerate and exploit the thrust to perform orbital maneuvers. They then began to design several rockets, ie engines that do not require an external atmosphere from which to draw part of the propellant, having all the reagents necessary for operation stowed on board in special tanks. In particular, several were developed thermochemical endoreactors, conceptually quite similar to those designed to power missiles in the military.

The idea behind these thrusters is to convert the chemical binding energy of the reactants (oxidant and fuel) into the enthalpy of the propellant mixture (i.e. into "expendable", "exchangeable" energy from the working fluid) through combustion, for then bring the products of the chemical reaction to expand into a gas-dynamic nozzle (convergent-divergent duct), transforming the enthalpy into kinetic energy (ie energy linked to the speed of translation of the gases). This process involves an acceleration of the gases and therefore, by the law of action-reaction of the dynamics, the birth of an opposite force acting on the engine: the thrust.

Three types of thermochemical engines were developed: liquid propellant, solid propellant and hybrid propellant (image), characterized by different thrusts produced and by different durations of the combustion process. In all three cases, however, there were problems related to the weight of the propellant (especially in the solid case, with a consequent increase in the weight of the vehicle) and to the size of the storage tanks (especially in the liquid case due to the low density of the reagents, with consequent increase of the aerodynamic resistance in the flight in the atmosphere). Therefore, the need was envisaged to develop another type of engine that would allow to reduce the mass of propellant to be stored on board and the volume of the tanks: each kg saved would be transformed into a kg of transportable payload and reducing the footprint would have reduced aerodynamic drag in the early stages of flight!

The development of technologies related to nuclear fission led scientists to think that atomic energy was the optimal solution on which to design the new class of engines. The idea of ​​nuclear propulsion had already taken hold in the United States and was being developed both in the maritime sector (in 1954 the first nuclear submarine was launched, the Nautilus) and in the aeronautical field, through the project NEPA (Nuclear Energy for Propulsion of Aircraft-Nuclear energy for aeronautical propulsion) and the program ANP (Aircraft Nuclear Propulsion-Nuclear aviation propulsion). 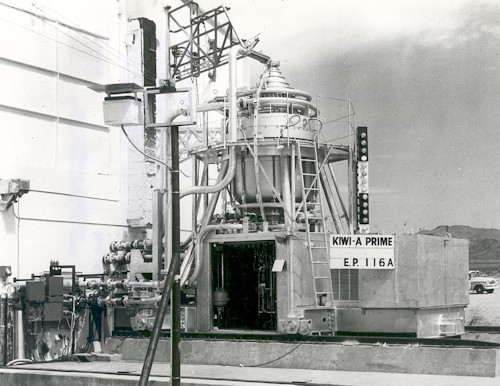 Taking advantage of the experience gained, they began to design the first ones nuclear thermal endoreactors.

In 1959 the first nuclear rocket engine, the Kiwi-A (“Rover” project). In 1961, the excellent results achieved gave impetus to the birth of an even larger and more ambitious program called NERVE (Nuclear Engines for Rocket Vehicle Applications - nuclear engines for applications to rocket vehicles), under the direction of NASA and AEC (Atomic Energy Comission-Atomic Energy Commission). The requirements of the engines built during this program varied constantly, becoming increasingly ambitious in terms of required thrust and generated thermal power.

Thanks to continuous improvements, the engineers came to speculate to equip the third stage of the Saturn V (the missile that brought man to the moon) of a nuclear thermal engine in such a way that it was able to carry large loads and that it could be used for the exploration of Mars. The lack of funds pushed however to lower again the required specifications, leading to the construction of less powerful engines.

The program continued until 1972, when it was canceled by the Nixon administration to concentrate funds on the development of a great protagonist of human space exploration: the Space Shuttle. 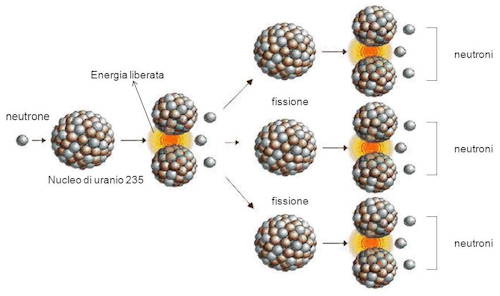 Nuclear thermal engines use the fission of an atom of some particular substances (i.e. the forced crushing of an atom and its nucleus) to produce heat, which is later used to heat the propellant. In this way an enthalpy of the working fluid is obtained (exactly as in the case of combustion in thermochemical endoreactors). The propellant can then be expanded into a nozzle, where enthalpy is transformed into kinetic energy. The result is an acceleration of the fluid itself and for the action-reaction principle a thrust acting on the engine.

The fission reaction is triggered by a bombardment by means of neutrons on some atoms of the fissile material used (normally uranium-235). The impact of neutrons generates the crushing of the atomic nucleus, whose components collide with nearby atoms causing them to break and therefore fueling the process. The fission of the nucleus mainly produces two forms of energy: the kinetic energy of the fragments and electromagnetic energy (gamma rays). The motion of the various fragments generated by the fission translates into an increase in the temperature of the material. To prevent the reaction from becoming uncontrolled, the presence of control rods (they absorb the fragments released by the atoms by inhibiting the reaction) or "moderators" capable of slowing down the neutrons by preventing them from fragmenting the atoms is necessary.

Triggered the reaction, the propellant, normally hydrogen H2 in liquid or ammonia form NH3, is made to slide on the walls of the reactor so that it can remove heat from it, thanks to the temperature difference between the fluid (very cold) and the core where the nuclear fission takes place (very hot). The working fluid, heating by this process, reaches 2200-2700 ° C, turning into gas. The higher the temperature reached by the gases, the greater their energy and therefore the thrust obtained by their expansion into the nozzle. The limitation to the maximum thrust that these systems can provide is therefore given by the maximum temperature that can be reached by the propellant without it causing the engine walls to fail.

How much mass of propellant does this propulsion system save compared to thermochemical endoreactors?

To answer this question it is necessary to introduce a very important parameter for endoreactors: thespecific weight impulse.

This parameter is defined as:

Where T is the thrust provided by the engine,mp is the flow rate (mass per second) of fuel passing through the nozzle e g0 is the acceleration of Earth's gravity. The specific weight impulse therefore represents the ratio between the thrust provided by the engine and the weight of the propellant passing through the nozzle (which therefore "produces" the aforementioned thrust). Plus the Isp it is large, the more the engine manages to provide thrust with a lower consumed mass (therefore weight) of propellant! Nuclear heat engines allow the use of low molecular weight propellant (for example thehydrogen) and in smaller quantities, since there is no need to trigger combustion, there is no need for oxidant and fuel, therefore they have a greater specific weight impulse (≈ 845 - 1000 MAIN CORSE) compared to thermochemical engines (≈ 200 - 400 MAIN CORSE). 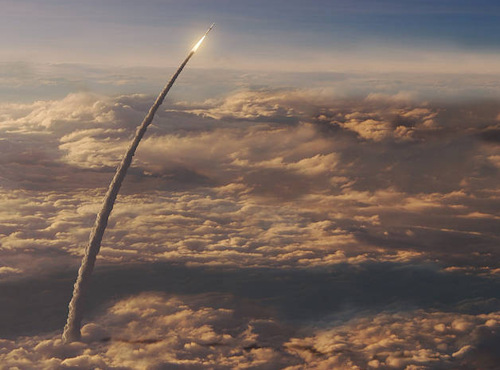 The advantage given by nuclear thermal propulsion is even more evident by inserting the specific weight impulse in the "Rocket Equation”, Ie the equation that in one of its forms links the speed variation imparted to the rocket to the mass of the propellant present on board.

As demonstrated, nuclear propulsion is advantageous however safety problems should not be underestimated, from the possible loss of fissile material to the need to protect the crew from radiation produced in the core. The recent American aspirations to bring man to Mars have however rekindled the interest in this type of thrusters. In fact, with the same mass of propellant, it is able to provide a higher speed increase compared to thermochemical reactors, thus allowing to travel shorter orbits of transfer between the Earth and the Red Planet. This is a fundamental aspect, especially considering the potential health risks for astronauts related to prolonged exposure to solar radiation. 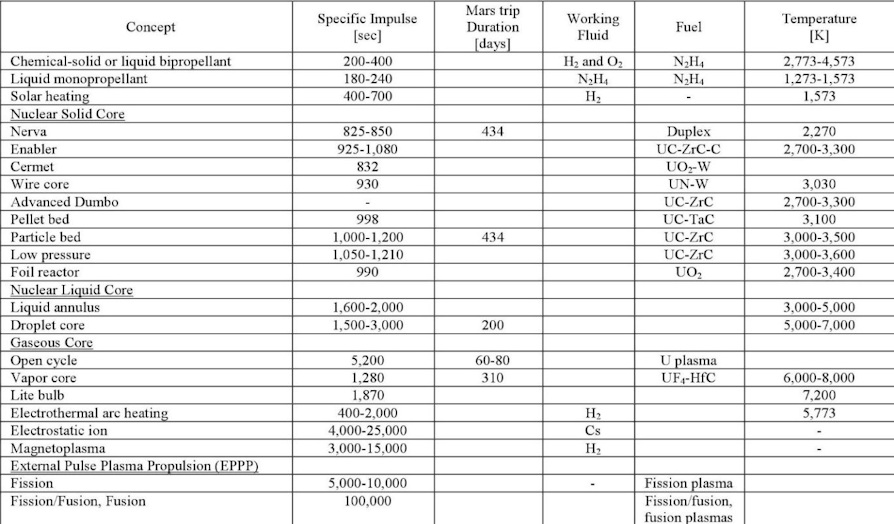 It often happens that in order to understand the origins of a conflict, as to understand where an evil comes from, one must investigate ...
5165
Read

Valery Vasilyevich Gerasimov was born in Kazan, in what was the Soviet Socialist Republic until 1990 ...
24386
Read

The dramatic images of these hours from Afghanistan summarize, in the most tragic way, not only the ...
2679
Read