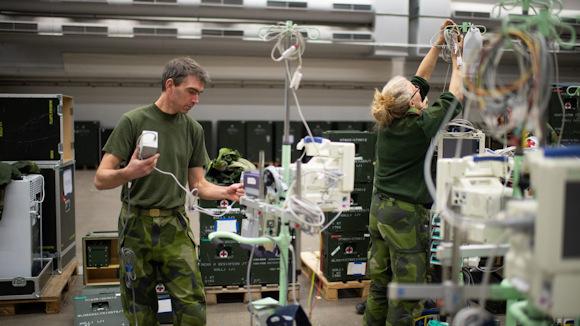 Sweden never ceases to amaze. The Nordic country is facing the current crisis with great courage, but also with extreme realism: I recommend reading the second part of the interview, leaving the part of the Italian prejudices resulting from part readings.

Stockholm has not decided to let the pandemic run its course, nor has it left the population to their fate. While the actual numbers of the massacres in the RSA are still hidden from us and the tens of thousands of deaths will involve at least a decade of trials, Sweden admits errors and many deaths in the elderly care centers.

I thank the Swedish Ministry of Health for having promptly answered our questions.

COVID-19 kills mainly in hospitals and nursing homes. How many beds and fans did you have at the beginning of the pandemic and how much have they increased to date?

We have more than doubled the number of beds and fans available in intensive care since the start of the pandemic and we have not stopped investing yet.

"The big debate we are facing right now concerns nursing homes for older people, where we have experienced devastating outbreaks of coronavirus. This means that Sweden's mortality rate is higher than our Nordic neighbors. Investigations are underway, because we have to understand which recommendations have not been followed and why, "says Dr. Tegnell in his interview with Nature. Have you collected specific statistics on deaths in nursing homes? When did you start to secure them? What steps have been taken? Our magazine has been quite active in reporting these cases in Italy and other countries.

To protect older citizens, the government has banned visits to nursing homes for the elderly. The Swedish Public Health Agency has also issued strict recommendations for people over the age of 70 to avoid contact with others and for the entire population to refrain from visiting the elderly. And as mentioned earlier, 87% of people over the age of 70 are following the recommendations of the Public Health Agency.

However, the average age of COVID-related deaths is 81 years. And over a third of COVID-19-related deaths in Sweden are cases in nursing homes for the elderly. One of the main objectives of Sweden's efforts to curb COVID-19 is to strengthen protection for those living in elderly nursing homes. More protective equipment and online training programs have been provided for staff, tests have been increased and over a thousand inspections will be carried out by the Inspectorate for Health and Social Care to see what measures are needed to strengthen the protection of older people in these structures.

What was the economic impact of the COVID-19 crisis on the Swedish economy? We would be particularly interested in learning about unemployment, consumer markets, services and public spending.

The crisis had serious effects on the Swedes and the Swedish economy. Many companies are closing down. We expect unemployment to rise frighteningly. The government has taken several economic measures to mitigate the economic effects and stabilize the economy.

Many people are surprised that most schools are open in Sweden. Dr. Tegnell seems to be surprised by their surprise. Do you have statistics on children as a vehicle of contagion in their families? Do grandparents have rarer contacts with young people than in southern Europe?

The government takes advice from the Swedish Public Health Agency on closing schools. Currently, all education in upper secondary schools and universities is conducted online, but kindergartens and compulsory schools for children up to 15 years of age remain open.

So far, the assessment of the Swedish Public Health Agency is that school closings are not necessary from a public health perspective. The spread of COVID-19 among children in schools is limited. The fact that school closures would have other negative consequences for Swedish society was taken into account. For example, an estimated 39% of healthcare workers would have to quit their jobs if schools were to close, which would cause significant problems for our hospitals.

In about 80% of Swedish families, both parents work. Consequently, the closure of schools would force a parent in every family to quit their job, which would have an immediate effect on many vital functions for society such as health care, elderly care, social assistance. , the police and firefighters. Most children in Sweden are enrolled in heavily subsidized early childhood education and public after-school centers.

However, if the Swedish Public Health Agency believes that all Swedish schools should shut down to combat the spread of COVID-19, the government is ready to do so. The Swedish Parliament recently adopted a law to implement school closings should the epidemiological assessment change and there is already a legal possibility to close schools locally, if necessary, to curb the local spread of COVID-19.

I can't talk about how often grandparents met their grandchildren before this crisis, but I know that since the start of this pandemic we have recommended people over the age of 70 to avoid social contact and they are doing it. We have older people who haven't met their children or grandchildren for weeks and weeks ...

What are the next steps of your strategy?

As mentioned above, the measures are regularly refined and adjusted in response to developments in the field. Government policy and decisions aim to limit the spread of infection in the country, guarantee the availability of health resources, limit the impact on critical services, mitigate the effects on people and companies.

It often happens that in order to understand the origins of a conflict, as to understand where an evil comes from, one must investigate ...
5159
Read

Ukraine is today at the center of a world question capable of determining the rupture of a status that has lasted from the end ...
6813
Read

Valery Vasilyevich Gerasimov was born in Kazan, in what was the Soviet Socialist Republic until 1990 ...
24380
Read

The best definition of intelligence is "ability to adapt" to changes, contexts, unexpected novelties ...
5046
Read

In previous articles we have presented the principles of possible DEW systems and we have dwelt on illustrating and ...
3264
Read

Considering the possible types of direct energy weapons and analyzing the experiments that have taken place in the world ...
5742
Read

Star Wars, the famous film series originally directed by George Lucas, has millions of fans around the world ....
6034
Read

The dramatic images of these hours from Afghanistan summarize, in the most tragic way, not only the ...
2678
Read

Legends fueled by the mystery surrounding this type of activity revolve around the world of intelligence. The...
2115
Read

The peace operations, in their various articulations, have seen the addition of numerous military personnel ...
4416
Read