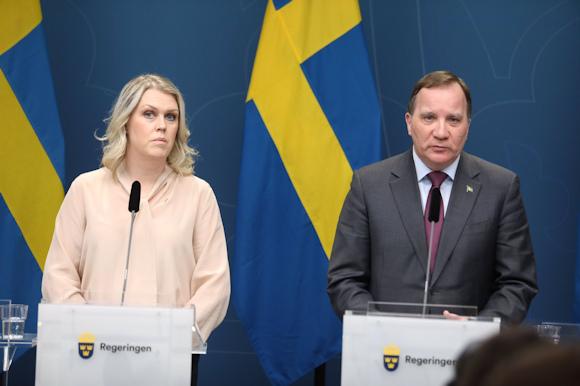 This is the first of two articles with which the Swedish Ministry of Health explains to readers of Online Defense, through an interview proposed by us and accepted by them, how they are facing the challenges posed by COVID-19, respecting their Constitution, with the utmost trust (reciprocated) in the intelligence of their citizens and with the aim of saving as much as possible the life and physical and mental health of the Swedes.

Don't ask us how they say "self-certification", "DPCM" and "keep healthy at home" in Stockholm, because we doubt they are translatable. We know, however, that many Italians, including our readers, take for granted what has been reported by some of our local commentators on the Swedish case and that for two months they have not ceased unleash bursts of catastrophic articles about what is happening in Sweden. The reason, let's face it, is also psychological and concerns, so to speak, the stability of the Italian internal front: honestly, if they (the Swedes) are right, we Italians are really miserable.

If you think, without hesitation, that Sweden has made the worst choice and is paying a higher price than the countries in the region, you have asked yourself the question whether the Nordic nations (but also Russia, Germany etc.) tell the truth about the number deaths in nursing homes for the elderly? Don't you even remember how France only told half the story, leaving the massacres in hospices until late March? The United Kingdom did the same, now preceding us in the sad count of the dead.

In an interview with Nature magazine, Anders Tegnell, Swedish epidemiologist of the Swedish National Health Agency and - in the interviewer's words - the architect of the Swedish approach to the pandemic, said that "There is not much legal possibility to close entire cities in Sweden using current laws". Would you explain it to our readers?

The Italian media have reported that the government has been granted special powers and that it could be the first step towards a radical change in strategy. Could you tell us more about this apparent change of preparation strategy? Has everything been reported correctly?

The government has proposed a new law authorizing it to decide directly on some issues related to the fight against the pandemic that would otherwise require a decision by the parliament itself. For example, it allows the government to regulate public meetings and to close shopping malls, shops, restaurants and theaters. The new legal basis also allows the government to block or limit access to certain means of transport (ferries, trains, etc.) and to geographically redistribute medicines and medical equipment or between health workers. Regulations adopted by the government in accordance with this law must be immediately submitted to the Swedish Parliament for consideration. The proposal has been approved by the Swedish Parliament and the legislation will enter into force for three months.

This is not a change of strategy; this is only in the event that the government has to act swiftly regarding issues relating to the fight against the pandemic and cannot wait for a bill to go through the whole process in Parliament.

International commentators and public opinion in many countries tend to place the different strategies of Italy and Sweden as opposite ends in the copy of COVID-19. It's true? Did the measures taken by the Italian cabinet influence the rulers of Sweden in any way?

We wouldn't say. Sweden shares the same goals as all other countries: saving lives and protecting public health. We are working with the same challenges as other countries: the extent and speed of the spread of the virus and the pressure on the national health system. We are using tools similar to most other countries - promoting social distancing, protecting vulnerable people and groups at risk, testing and strengthening our health system to cope with the pandemic. The decisions made by the Swedish government are based on the advice of our expert agencies and international expert organizations. The measures are regularly refined and adjusted in response to developments in the field in our country. The measures taken in Sweden are a response to our specific local situation.

According to the World Values ​​Survey, there is generally a high level of trust in Swedish society. The survey shows a much higher than average level of social trust. There is a high level of interpersonal trust, which means that Swedes trust each other to act responsibly.

Numerous media outlets continue to compare Sweden with its neighboring Nordic countries, Denmark and Norway, where the death toll is lower. In a article, I wrote that the spread of COVID-19 in Sweden can be compared to Belgium and Switzerland (whose population is similar), not to Denmark or Norway. What is your position on this point?

Sweden shares the same goal as all other countries: to protect the life and health of its population. Basically, Sweden's measures differ from other countries only for two reasons: we are not closing schools for younger children or childcare facilities e we have no regulation that forces citizens to stay in their homes.

It is too early to compare the price (of COVID-19) in terms of human lives internationally and to draw definitive conclusions. Countries differ in terms of population density, average age, geography, lifestyles and many other factors that influence the spread of the virus. Countries are also in different phases of the pandemic and in different phases of maintaining or relaxing the measures.

There is currently a public debate in Sweden about why there are more deaths in our country than among our Nordic neighbors. The Swedish Public Health Agency and other experts have proposed some explanations. The calendar of annual spring school holidays in Sweden was cited as a possible reason: at the end of February around 20.000 Swedes traveled to southernmost parts of Europe where the spread of the virus was already very high but still completely unknown.

The fact that the virus has spread rapidly to nursing homes in Stockholm has also been mentioned as a potential factor. Special nursing homes for older people (Editor's note: RSA in Italy) are institutions where residents are usually in the last phase of their life. It is therefore a very fragile group that lives in environments that aim to be similar to home; they are built to encourage social contacts, not to be hospital institutions that encourage isolation.

Sweden is known to have recorded the causes of death in a particularly rigorous way and we register the association with COVID-19 for all victims of the disease, regardless of old age and underlying diseases. This is not the case in many other countries and Sweden therefore has a relatively higher number of deaths from COVID-19 than in many other countries.

However, the Swedish Public Health Agency said that although these factors may have affected the death toll in Sweden, it is still too early for any clear conclusions and comparisons relating to the COVID-19 pandemic. It will probably take a long time before we can evaluate it thoroughly.

In the end, the world will have to agree on how to record deaths, how to detect unregistered cases and how to evaluate the general health effects of COVID-19 on the entire population. It will be important to learn from all this in order to prepare for possible future outbreaks of similar viruses. But right now, the main goal of the Swedish government is to save lives and mitigate the effects of COVID-19.

Also read: "Sweden's strategy against the pandemic: open primary schools and older people to be protected (second and final part)"

It often happens that in order to understand the origins of a conflict, as to understand where an evil comes from, one must investigate ...
5153
Read

Ukraine is today at the center of a world question capable of determining the rupture of a status that has lasted from the end ...
6809
Read

Valery Vasilyevich Gerasimov was born in Kazan, in what was the Soviet Socialist Republic until 1990 ...
24374
Read

The best definition of intelligence is "ability to adapt" to changes, contexts, unexpected novelties ...
5043
Read

In previous articles we have presented the principles of possible DEW systems and we have dwelt on illustrating and ...
3261
Read

Considering the possible types of direct energy weapons and analyzing the experiments that have taken place in the world ...
5740
Read

Star Wars, the famous film series originally directed by George Lucas, has millions of fans around the world ....
6033
Read

The dramatic images of these hours from Afghanistan summarize, in the most tragic way, not only the ...
2673
Read

Legends fueled by the mystery surrounding this type of activity revolve around the world of intelligence. The...
2115
Read

The peace operations, in their various articulations, have seen the addition of numerous military personnel ...
4416
Read