Home Recommended Insights At the bottom of the sea the soldier's armor ... 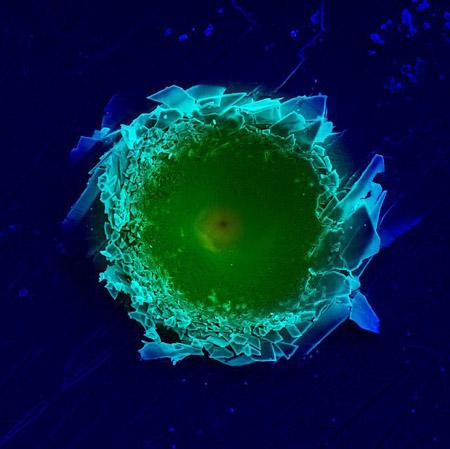 To protect American troops on the battlefield, scientists at the Massachusetts Institute of Technology (MIT) are developing a new undeformable and invisible armor inspired by the marine world.

Scientists were attracted to the shell "Placuna Placenta" and were able to reproduce in the laboratory the peculiar characteristics of the shell, formed at 99% by calcite to protect the organic material. The extraordinary strength of the shell is associated with uncommon transparency, which is why we are already talking about "SeaShell" or marine shield.

It is not the first time that scientists are inspired by the natural world for possible military implications. Just think of spy drones like the Hummingbird of AeroVironment.

The new biological exoskeleton could represent the new frontier for advanced protection systems for troops.

Transparent armor has been under consideration for about five years. Mit scientists have discovered that the shell, "attacked" from the outside with a diamond point, responds by forming a multilayer calcite barrier. The shell therefore responds, naturally, to protect the mollusc. The Placuna Placenta shell is able to dissipate up to ten times the energy of a penetrating body, damping the spread of impact cracks. The natural reaction of the shell to a localized external attack has effectively preserved the mechanical integrity of the rest of the structure.

In a not-so-distant future, soldiers could be protected by a light transparent structure of biological design that does not impede their movements and is able to dissipate impact energy.

The study was published in the journal Nature Materials.

It often happens that in order to understand the origins of a conflict, as to understand where an evil comes from, one must investigate ...
5529
Read

Ukraine is today at the center of a world question capable of determining the rupture of a status that has lasted from the end ...
7067
Read

Valery Vasilyevich Gerasimov was born in Kazan, in what was the Soviet Socialist Republic until 1990 ...
24872
Read

The best definition of intelligence is "ability to adapt" to changes, contexts, unexpected novelties ...
5188
Read

In previous articles we have presented the principles of possible DEW systems and we have dwelt on illustrating and ...
3435
Read

Considering the possible types of direct energy weapons and analyzing the experiments that have taken place in the world ...
6143
Read

Star Wars, the famous film series originally directed by George Lucas, has millions of fans around the world ....
6449
Read

The dramatic images of these hours from Afghanistan summarize, in the most tragic way, not only the ...
2770
Read

Legends fueled by the mystery surrounding this type of activity revolve around the world of intelligence. The...
2185
Read

The peace operations, in their various articulations, have seen the addition of numerous military personnel ...
4625
Read