Direct from Afghanistan: delivery passes between "Aosta" and "Sassari" 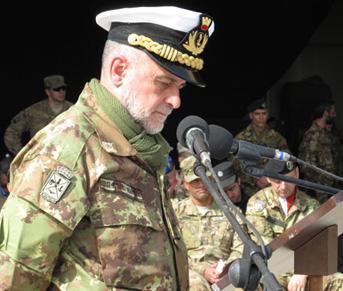 "Afghanistan has become a more autonomous country, a place where it is now possible for stability to become lasting".

Admiral Luigi Binelli Mantelli, Chief of Staff of the Defense, present in Herat for the ceremony that sanctioned the baton by Brigadier General Michele Pellegrino and the Manlio paris, is optimistic about the future of Afghanistan. Scopigno and following which, therefore, the "Sassari" brigade took over the leadership of the Regional Command West in Afghanistan, replacing the "Aosta" brigade that returns to Italy after six months of mission.

General Pellegrino was praised by the Chief of Staff for how the operations were conducted alongside the Afghan security forces. "To give a minimum of stability to this land we have collaborated intensely with the local forces, which have always shown the will and the obstinacy to oppose those who undermine the tranquility of their land. To our Afghan friends we assure that we will continue to give all our support and assistance and that, therefore, we will never abandon them, "the admiral added.

The reference to entry, after the 2014, in a phase no longer operational, but of simple support, led Admiral Binelli Mantelli to recall the need not to frustrate the work carried out with so much energy and sacrifice of human lives . This is what the Chief of Staff of the Defense said about the 53 Italian boys who have fallen so far while engaging in soul and body in the ISAF mission. "It is they who have allowed this country to grow and move forward. Many have lost their lives or suffered serious injuries due to a noble cause. Their sacrifice was not in vain and I am sure that the new phase that begins for Afghanistan will prove it ".

And this is already demonstrated to a large extent by the work completed by the PRT, the Provincial reconstruction team that, in nine years of activity - the group has started working in the 2006 - has contributed not a little to change the face of the country. "Schools, health facilities, water and sewage pipelines. There are many works carried out in favor of the civilian population, "said Binelli Mantelli. The provincial group that deals with the reconstruction will close the 31 in March, the first sign of the phase of return of the Italian Armed Forces from the West area of ​​their competence.

To the incoming brigade the admiral recalled the delicate task that now awaits the Italian contingent in Herat. "After the reduction of the Italian forces of more than 1000 men and the delivery to Afghanistan of five advanced operational bases, such as Qala-ye-Naw, Farah, Bala Boluk, Camp Stone and Shindand, from Camp Arena to Herat will begin the delicate logistical operation of the return of vehicles and materials in Italy. I am sure that this phase will also be managed with the utmost professionalism and ability ".

A new challenge, therefore, for the contingent engaged in the International Security Assistance Force.

It often happens that in order to understand the origins of a conflict, as to understand where an evil comes from, one must investigate ...
5559
Read

Ukraine is today at the center of a world question capable of determining the rupture of a status that has lasted from the end ...
7088
Read

Valery Vasilyevich Gerasimov was born in Kazan, in what was the Soviet Socialist Republic until 1990 ...
24892
Read

In previous articles we have presented the principles of possible DEW systems and we have dwelt on illustrating and ...
3448
Read

Considering the possible types of direct energy weapons and analyzing the experiments that have taken place in the world ...
6170
Read

Star Wars, the famous film series originally directed by George Lucas, has millions of fans around the world ....
6486
Read

The peace operations, in their various articulations, have seen the addition of numerous military personnel ...
4639
Read