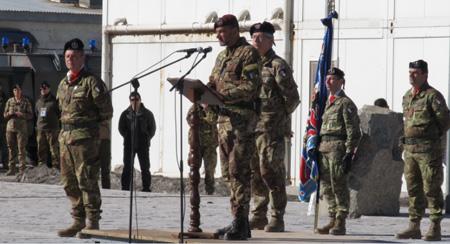 The bitterness of having lost two boys of the Thunderbolt in the Afghan theater, together with other 51 colleagues who died to fulfill their duty, but also the satisfaction of having left a country with the possibility of starting alone towards the future.

Colonel Franco Merlino of the 183 ° Parachute Regiment "Nembo" leaves from Afghanistan with these memories and these feelings, leaving Colonel Nicola Piccolo of the 152 ° Sassari "Infantry Regiment" command of the Transition Support Unit-center.

A difficult task, that of the Transition Unit. "We had to work, and my successor will continue to do so, to pass the responsibility for controlling the territory to the Afghan forces. We have made them able to personally manage complex operations, in view of the Italian disengagement planned for the end of the 2014 ".

The numbers that the captain checks on are significant and convey the meaning of the work done. "In five and a half months the work of some 800 men has served to give security to the area, to prepare 15 convoys that from the newly closed Fobs have transported the goods that were to return to Herat. It was also fundamental for the support to the Prt (Provincial Reconstruction Team), thanks to which 30 projects were carried out in favor of the civilian population in the West area of ​​our competence. These projects have involved the delivery of health and medical kits, the assistance for courses held by doctors to civilians to teach them how to use the material and a series of other operations necessary to enable the work of our unit. building of schools and libraries. A frenetic, intense activity that has gone on from dawn to late at night ”.

Just yesterday, however, the alternation ceremony in command of the "Engineers" Task Force took place between Colonel Bruno Pisciotta and Lieutenant Colonel Stefano Messina. One of the most important tasks that the genius will have to face is managing security in view of the elections next April. “We are already monitoring the places that will host the polling stations, the access and exit roads. The IED threat is always lurking, right now more than ever. Our task will be to give security to all those who with good will and taking risks are working for the elections and to the Afghan citizens who with their vote intend to change the face of the country ", is the statement by Lieutenant Colonel Messina, aware of having a responsibility that, in such a delicate moment, weighs even more than usual.

In previous articles we have presented the principles of possible DEW systems and we have dwelt on illustrating and ...
3448
Read

Considering the possible types of direct energy weapons and analyzing the experiments that have taken place in the world ...
6172
Read

Star Wars, the famous film series originally directed by George Lucas, has millions of fans around the world ....
6488
Read