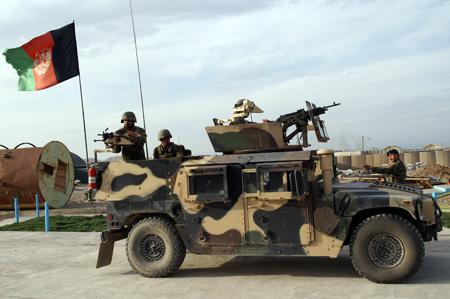 At 15 kilometers from Herat, in the village of Camp Arena, the ISAF mission soldiers are waiting to return home. After the closing of the last advanced base, that of Shindand, they work hard, albeit at a reduced quota, to make sure that by the end of the 2014 everything has been done to leave the total and complete responsibility for the control of the territory to the ANSF ( Afghan National Security Force).

The Afghan security forces, thanks to the collaboration and qualified training provided by our military, are increasingly prepared and ready to face the difficulties of the troubled country. There are still eleven provinces, especially those located in the South, which still do not complete the process of passing control to Afghan hands.

The start-up towards "autonomy" compared to the ISAF mission is at an advanced stage, given that it started in June 2013. This last step will mark the passage from a first to an after the mission. A mission that in the Italian area of ​​competence has already borne fruit, even though our compatriots have paid a very high toll of blood. 53 are our boys who died on Afghan soil and thanks to whom the hope of reaching a stabilization that is not just a facade, now appears to be a closer possibility although far from obvious.

That March of 2011 seems far away in which the triumphant announcement given by President Karzai regarding the sale to the local forces of Kabul and Bayman, already seemed a giant step. Since then, and since the following November in which the province of Herat has also made the same transition, many - and not only those related to safety management - have been the progress in this country beaten by the icy winds from the Himalayas. Winds that break the skin and lips and that at times, in this month of February, give way to a warm sun. Shy but stubborn, like the Afghan women who, in this transitional 2014, even represent half of the school population of local institutions, as was unthinkable until recently.

The institutions in which the women of the "new Afghanistan" are formed are in many cases built thanks to the Provincial Reconstruction Team - CIMIC Italian Detachment, the military unit that has the task of providing assistance to the institutions of the Province of Herat for the realization of the local development plans. And together with the schools, water pipes and infrastructures have been built or rebuilt. As well as new hospitals, so much so that the situation appears to have improved from a health point of view. With Isaf 120 health facilities have been built in general throughout the country and around 70% of the population can make use of it today. In short, the mission seems to have reached its goals.

The unknowns of the April elections remain, of the still widespread corruption. Likewise, it is necessary to define how the transition from the operational phase to the assistance phase and, above all, if Italy will be part of this new phase. But, whatever happens, Afghanistan is no longer the same as our military had found when they arrived and this can only ignite the hope that it will learn to walk with its own legs.