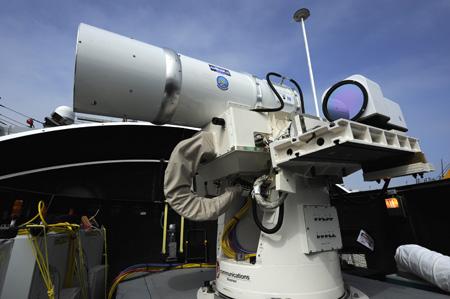 The United States Navy is about to equip its ships with lasers designed to knock down drones and enemy aircraft and electromagnetic cannons that can shoot bullets at hypersonic speeds.

By the end of this year, at least one US Navy boat will receive a laser turret, while another two years of development will be needed for the "railgun".

This was stated by Commander Mike Ziv, Head of the Directed Energy and Electric Weapon Systems Program at FoxNews.

The ship chosen to perform laser tests, which will start in the summer, is the USS Ponce, an Austin-class amphibious transport unit.

According to the US Navy, laser technology has been designed to eliminate asymmetric threats such as drones, small planes and motorboats: all potential threats to warships in the Persian Gulf. 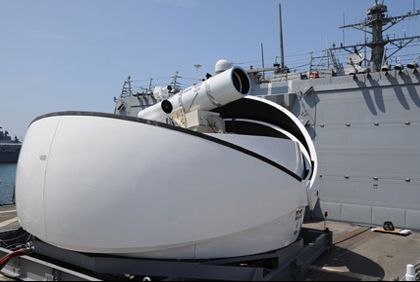 Electromagnetic guns have already been tested at a polygon in Virginia. Us Navy data speaks of three kilograms of bullet (3,2 kg for accuracy) shot at the speed of 2,4 km per second. Tungsten bullets reach the target at seven times that of the sound, for a higher power (at a significantly lower cost) to a Tomahawk missile.

However, both systems have some gaps. The laser, for example, tends to lose effectiveness in the presence of bad weather conditions or turbulence in the atmosphere, while the railgun requires an enormous amount of electricity to accelerate the projectile.

The Navy, however, seems to be running for cover stating that it has managed to overcome the unknown storm, but confirming the loss of effectiveness of the laser beam in the case of cloudy skies, precipitation or dust in the air.

The powerful electromagnetic guns are lethal (they were also used in Transformers 2 to destroy a Decepticon with a single shot), but to date they can only be installed on the Zumwalt-class destroyers, under construction at the Bath Iron Works in Maine.

Within two years, accumulators capable of storing sufficient energy and allowing the installation of railguns also on board other US warships should be ready. 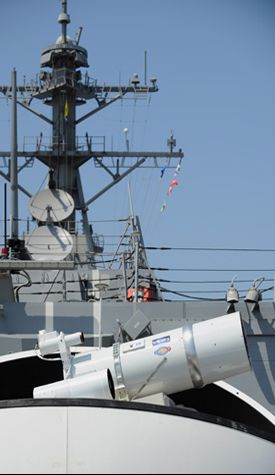 Both weapon systems are considered the future because they are very powerful, but at a negligible cost. Just think that a single interceptor missile costs at least a million dollars, compared to the few dollars of a single laser shot.

The first Zumwalt class boat, the largest and most powerful US Navy destroyer ever built, was completed last October.

The ship was designed, designed and armed for the war of the future at an exorbitant cost: 3,5 billion dollars per boat, about three times the cost of a current destroyer.

Everything on this ship looks great. Its stealth profile, for example, would make it virtually invisible to radar. Despite being 40% larger than an Arleigh Burke-class destroyer, it has such low Rcs (Radar Cross-Section) that it should look like a harmless fishing boat to enemy (and non-enemy) radar.

The destroyer Zumwalt reinstates the bell: the maximum width of the ship is on the floating line, while moving upward the hull begins to shrink. Its unusual hull is then designed with wave or wave penetration technology for a maximum speed of 35 knots (56 km / h).

The Zumwalt class is armed with eighty Tomahawk cruise missiles (located on various advanced VSM Mk 57 pods, along the ship so you will not lose missile capability even if hit), two 155 mm Ags cannons, two 57 mm and advanced Sea Sparrow batteries.

The Gun Advanced System or Ags deserves a separate discussion. Shoot bullets of eleven kilos, with a margin of error (Cep) of 50 meters, at a maximum distance of 154 km. Each unit will have a capacity of 750 projectiles. The reed of the ADS is cooled to water to prevent overheating, while the rate of fire is ten strokes per minute per weapon. The combined firepower of a pair of turrets would give each Zumwalt-class destroyer a firepower of twelve M198 field guns.

Two Sh-60 / Seahawk (Lamps Mk III) helicopters will be on board for the anti-submarine warfare and three Mq-8 Fire Scouts, unmanned helicopters developed for armed reconnaissance. 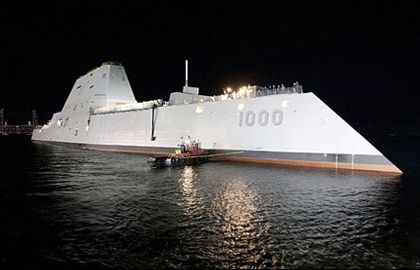 The size of the ship and the power plant capable of producing 78 megawatts of electricity - enough to feed 78 thousands of homes - make it an ideal platform for future weapons such as the electromagnetic cannon.

The degree of automation finally reached would be so high that a crew of 158 members, half of those required for the current generation of destroyers, would be sufficient to conduct the ship.

The Zumwalt is the point of breaking between the past and the new war scenarios of the future.

The most powerful warship on the planet?

Its future electromagnetic armament would put it in the power to impose "domination" on any sea and against any enemy.

The Zumwalt can be considered as F-22 (that is why we used the term 'domain', the same and only used to describe US hunting).

Of the 32 ships planned by the US Navy, however, only three will be built. In addition to leader Uss Zumwalt, Uss Michael Monsoor and Uss Lyndon Johnson.

A report by 2009 signed by the Government Accountability Office or Gao, showed that only four of the ten super technologies installed on board the Zumwalt can be considered fully operational.

It often happens that in order to understand the origins of a conflict, as to understand where an evil comes from, one must investigate ...
5552
Read

Ukraine is today at the center of a world question capable of determining the rupture of a status that has lasted from the end ...
7084
Read

Valery Vasilyevich Gerasimov was born in Kazan, in what was the Soviet Socialist Republic until 1990 ...
24887
Read

The best definition of intelligence is "ability to adapt" to changes, contexts, unexpected novelties ...
5194
Read

In previous articles we have presented the principles of possible DEW systems and we have dwelt on illustrating and ...
3445
Read

Considering the possible types of direct energy weapons and analyzing the experiments that have taken place in the world ...
6167
Read

Star Wars, the famous film series originally directed by George Lucas, has millions of fans around the world ....
6484
Read

The dramatic images of these hours from Afghanistan summarize, in the most tragic way, not only the ...
2776
Read

Legends fueled by the mystery surrounding this type of activity revolve around the world of intelligence. The...
2199
Read

The peace operations, in their various articulations, have seen the addition of numerous military personnel ...
4637
Read